How Alzheimer’s Affects The Brain 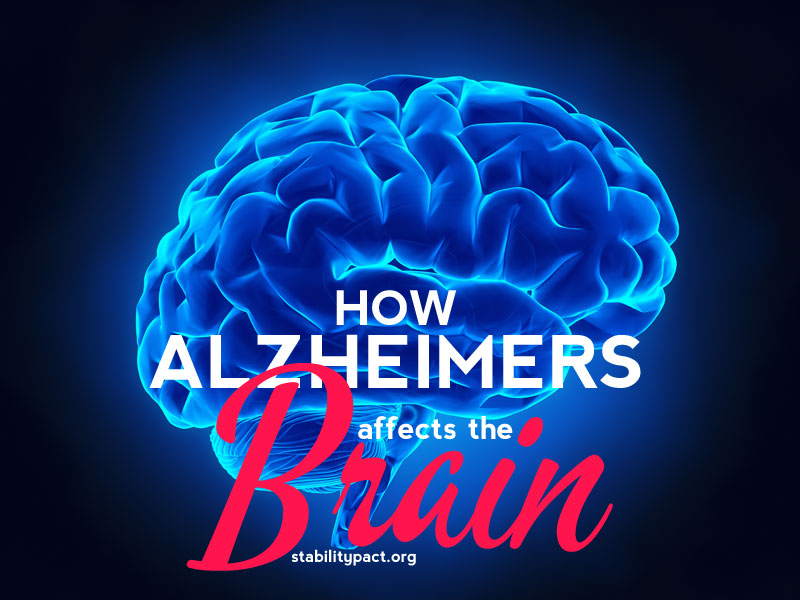 According to the Alzheimer’s Association, over 5 million people in the United States currently suffer from Alzheimer’s.  Alzheimer’s is a common form of dementia, and is a degenerative illness that results in a loss of nerve cells and neurons over time.

As a result, most areas of the brain are affected.  However, the rate at which the brain degenerates can vary, meaning different sufferers of Alzheimer’s will have their own unique experiences with the condition. This 60-second method can help protect the brain from cognitive decline.

There are certain attributes, however, that are commonly associated with Alzheimer’s.  These include things like changes to behavior, memory, and a person’s thought process.

How Does Alzheimer’s Affect The Brain?

The brain is made up of three sections, each with a unique set of responsibilities.  The hindbrain and midbrain are responsible for basic functions for life support, such as blood pressure.  The forebrain controls complex processes like memory and language skills.  The cerebral cortex is a thin area covering the forebrain’s surface that holds ten billion brain cells.  Below the cortex are fibers that transport information to other areas of the brain.

As Alzheimer’s develops, these tissues begin to shrink, meaning the information cannot be transported as effectively as usual.  In the early stages, the sufferer’s short-term memory will deteriorate, due to the cells in the hippocampus degenerating, and the ability to perform routine tasks may be hindered.  Once the disease reaches the cerebral cortex, thought processes will be affected, including judgement and language, and those with the disease may experience emotional outbursts or out of character behavior.

Patients may become obsessive, develop a phobia of change, or start to believe things that are untrue.  As Alzheimer’s disease advances further, more nerve cells will be destroyed, making any uncharacteristic actions more noticeable and raising the risk of wandering, confusion, or agitation.

During the final stages of the disease, it’s possible afflicted patients will lose the ability to speak, recognize others, feed themselves, or control bodily functions.  Their memory will deteriorate further and may be almost completely lost.  Ongoing, 24 hour per day care is usually required.

Alzheimer’s is thought to be terminal and those with the disease usually live 8 to 10 years after it develops.  However it has been known to last for up to 20 years in certain cases.

While Alzheimer’s itself may not be the direct cause of death, it is certainly a factor.  For example, NHS Choices states it is common for sufferers of the disease to die from illnesses such as pneumonia.  In many of these cases, the patient may not be able to fully express the fact they are unwell, or even realize it themselves.

There is currently no known cure for Alzheimer’s disease.  However, there are treatments available that can help make life more tolerable for those afflicted.

Medications such as donepezil, galantamine, and memantine can all help delay the effects of the disease, while occupational therapy can help patients create practical solutions to the problems caused by Alzheimer’s.  Cognitive behavioural therapy (CBT) may also be used to help reduce depression, anxiety, delusions, or other negative or uncharacteristic behavior that has occurred as a result of the disease.